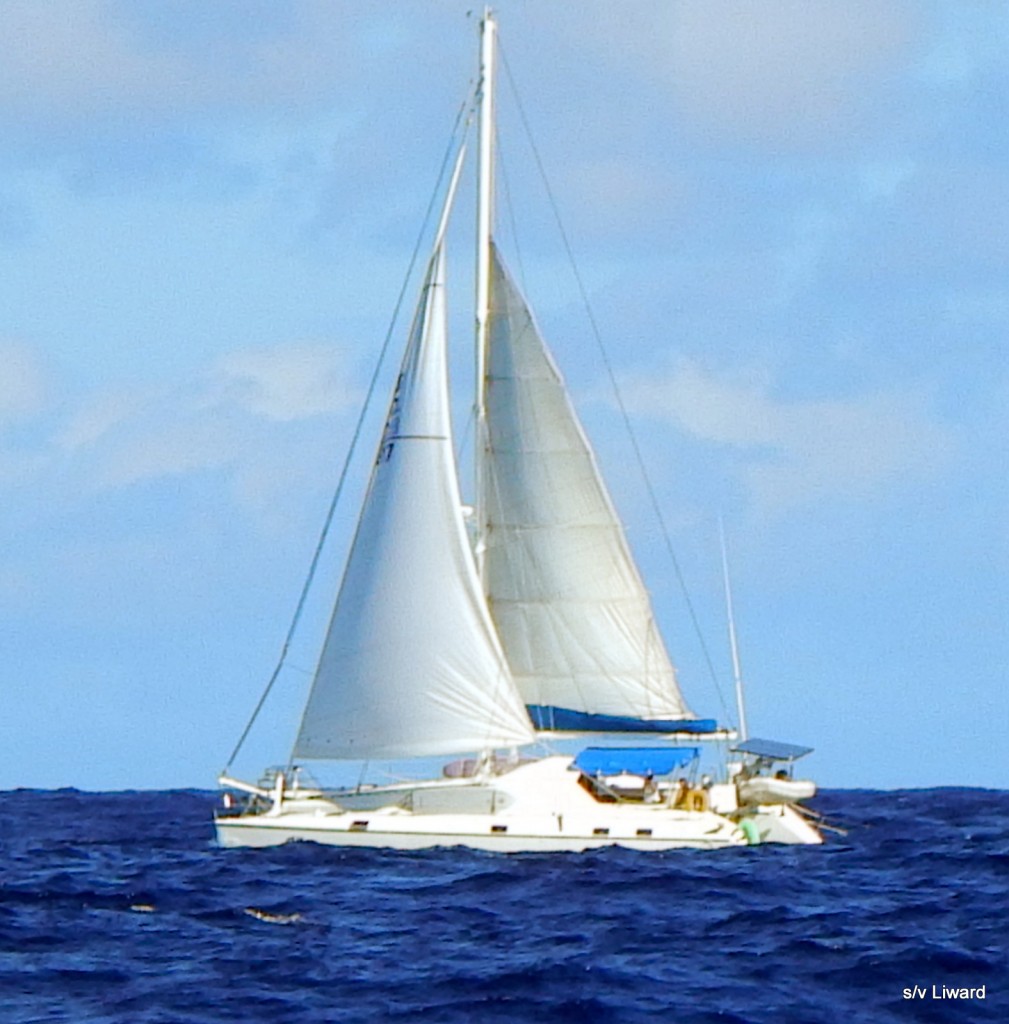 The morning had started out as a beautiful morning.  We finally had a good wind for our departure from Huahine.  Our s/v Liward friends were also taking advantage of the wind for their return to Tahiti.  We were a little unsure about our next destination, but we were headed east for the time being.  Hawaii was our eventual destination, and we needed to make some easting in order to have the best angle for the trip north.

We were sailing along side Liward.  We would see humpback whales breach.  Steve and Lili never saw the whales, and referred to us as the “whale whisperers”.  The day was just right.

Everything changed the moment I went to the SSB to check on email.

There were two emails both titled with the name of Wil’s brother-in-law.  One was from Wil’s sister, and one was from Wil’s mom.  The last time we had received an email titled with a person’s name, it was about an old friend from home who had died.  Surely, this wasn’t the case.

I read and re-read the emails.  I couldn’t stop from shaking.  My mind was in disbelief.  Wil was in the cockpit.  How was I going to tell him that his brother-in-law had just died?  Wil walked in seconds later and saw the look on my face.  I couldn’t say a word.  I only indicated for him to read the emails.  The tears flowed uncontrollably.

We cried and cried.  The kids cried too.  It was too difficult to focus on sailing.  I radioed Liward to explain the reason for our inattentive sailing.  They were there for us.

Suddenly, we had a fish on the line.  Now we had to focus.  We all jumped to attention and fell into our “fish on” duties.  Before we knew it, we had our biggest mahi-mahi onboard.  We never measured it, but it’s length more than surpassed the width of our transom steps.  It was huge!  And a nice distraction from our recent news.

The distraction continued.  We had barely brought the mahi onboard when suddenly we had another fish on.  The next fish was even bigger than the first, and it was a wahoo.  Wil barely had room for both himself and the fish on the transom.  The wahoo was not going down without a fight.  Even out of the water, it wriggled so hard that it kept smacking Wil on the legs.  Wil called for our rarely used bat.  He did his best to hit the wahoo over the head, but the fish was too tough.  With every hit, blood splattered everywhere, and all over Wil.  He kept hitting the wahoo, and with every smack, kept yelling “All hail the bat!”  We all couldn’t help but laugh.  We needed this distraction.

Once both fish were processed and put away, we returned to feeling sad and numb.

What were we going to do?  We were on passage, and we had cleared out of French Polynesia.  There was only one thing to do.  We emailed our agent with Tahiti Crew and explained our situation.  Would they let us clear back into French Polynesia, so Wil could fly out to his sister in California?  Our agent was going to do what she could.  We aimed for Tahiti.

We sailed overnight.  In the morning, we didn’t yet have clearance approval from our agent, so we stopped in Moorea, anchoring just outside Baie d’Opunohu.  The anchor was barely on the bottom when we got word that we could proceed to Tahiti.

We dropped the hook near Marina Taina and quickly went ashore to meet with the agent.  She was quick and effective through the entire process.  She drove us to the immigration office at the airport in Papeete and assisted us through all of the paperwork.  She even found and purchased plane tickets for Wil, putting him on a flight for that night.

Wil would be gone for two weeks.  We had hoped that he could stay with his sister for 3-4 weeks, but the French Polynesian authorities only allowed us 15 days on an emergency visa.  We had no choice, and we would take what they gave us.

However, there was a complication on our part.  The moment Wil stepped on the plane, he was considered cleared out of French Polynesia . . . again.  He would not be using his 15 days while he was in the US.  The rest of us would remain in French Polynesia, using up our 15 days.  The day Wil was scheduled to return to Tahiti was also the day the kids and I would be required to clear out.  Our agent tried to get permission for us to be allowed to stay with our “captain”, but we were denied.  I would have to have the boat ready for passage the moment Wil returned.

The remainder of our day was spent going over things I would need to attend to in Wil’s absence, as well as getting him packed for the trip.  After having come off an overnight passage, we were mentally and physically exhausted, but there was no time to stop.  That evening, Steve (s/v Liward) picked Wil up by dinghy and then drove him to the airport in their rental car.

Wil was gone, and suddenly the kids and I had the boat to ourselves in Tahiti.  While I was sad that I couldn’t go with him, and sad for the loss of his brother-in-law, I didn’t feel like we were alone.  Liward was in the anchorage for about a week until they hauled out, and Macha would arrive the next day.

Macha had family visiting for about 6 weeks, which to Colin’s good fortune, included 12-year old Griffin.  They had played together in Huahine, and now would get to be together again in Tahiti.

Regardless of Wil’s absence, I knew that I didn’t want to stay in the “Carrefour Bay” anchorage near Marina Taina for the entire time Wil was gone.  I would go crazy in the crowded anchorage and preferred to be a bit more secluded.  Moorea was the island of choice until his return.